Though Larry Stewart was exposed to music early on, it was sports that initially captured his attention. After receiving a baseball scholarship to Nashville’s Belmont College, Larry, whose father had passed away from a heart condition, found music as a way to close the gap he was feeling without his dad.

“In some ways, I moved to Nashville to live out my father’s dream,” admits Larry Stewart of what was to become his musical destiny. “When I got here, there were all kinds of people who valued musical talent–and I found myself slowly fitting into the music business.”

“The way I act is very normal. I just do what I do and let it go at that,” explains the soft-spoken vocalist. “It comes from growing up in a small town where the people respected each other and looked after each other. The values I learned there pretty much shape the way I look at the world around me.

“I had a pretty basic childhood. My parents loved me and I was around music from the first day I remember. My dad was a great singer and as I got older, I played piano for him, but I also played a lot of sports. They gave me support with whatever I did. They taught me lessons and gave me the tools to seek my dreams.”

“Being in Restless Heart showed me how powerful music can be,” Stewart says, defining his motivations. “I always knew how much it moved me–and there I saw it did the same thing to other people. To me, you need to sing songs for more than yourself. Making records is a privilege. I think you need to find songs that might give people a little insight into their own lives. Or give them words they may not have to tell the people they care for how they’re feeling.

“Let’s face it, he adds, with a laugh, “most guys aren’t real comfortable talking about their emotions in everyday conversation. I know I’m not!”

And so, Larry Stewart makes records. Over the years, many of the songs he’s sung have become standards. But for someone with a rich musical background, it makes sense. “My dad was one of the best singers I’ve ever heard, because he had this smooth, very warm baritone and sounded like Bing Crosby. But when he sang, it was like he was talking to you–it was conversational.

“He was friendly with Gordon Stoker of the Jordanaires and the Imperials. All those old classic gospel groups: the Statesmen, the Prophets, the Blackwoods–I was around all of them growing up. I remember going to singings, that’s what we called them, with the Happy Goodman Family.”

By the time he moved to Nashville, Stewart’s rich musical foundation was firmly in place. When he decided to make the transition from sports to music he, like so many hopefuls, had his share of menial Music Row jobs. He was a stock clerk at the Country Music Hall of Fame, mowed grass at performing rights administrators BMI and ran tape copies at MCA Music. It was while working at MCA that longtime family friend Jerry Crutchfield coaxed Stewart into singing a few demos for his brother Jan.

The word quickly spread about the young man with a voice that mixed strength and intimacy with a honest raggedness that made him real. Suddenly, Stewart was an in-demand demo singer–and it wasn’t long until destiny came knocking in the form of Tim DuBois, who was putting together a band called Restless Heart. It was a group marked as much by the quality of the songs they sang as their lush vocal harmonies.

“Two people searching for the American dream/Doing the best we can do/There ain’t much glamour, glitter and gold/It’s an uphill battle if the truth be told/This is a real life love/It ain’t perfect, but it’s close enough,” he sings on “Real Life Love,” of his album Heart Like A Hurricane. In that moment, it’s crystal clear why millions of people have clamored to hear him sing love songs over the years.

Though he believes that his strong suit is as a vocalist, Stewart is also an accomplished writer. In addition to penning “Long Lost Friend” for Restless Heart, he’s also contributed “But I Will” to Faith Hill’s debut, “Fool To Fall” as a single for Pearl River and “This Road” to Mike Reid’s critically acclaimed Twilight Town.

Though he’s reluctant to call himself a romantic (“I’m not sure it’s what you do, but more how you feel–and my family knows how I feel about them”), he does admit that every song he sings is something that speaks to people with his intense passion for music and emotion.

“To me, commitment is everything. Life isn’t easy; love isn’t easy,” he begins outlining his motivations. “But, if you’re committed and you stick with it, then it will work out. “I made a commitment to my family, my friends, country music and, especially, myself. Without that, there’s nothing–and it takes commitment to tough it out through the hard times. But you gotta.

“If you make a commitment, you have to carry it through. Maybe that’s where integrity comes in. At least, that’s what I hope for and work towards. And at the end of the day, you know you gave it your all, whatever it is. If that’s the case, then you have to feel good, because you’ve done what you believe in. That, to me, is what it’s all about.” 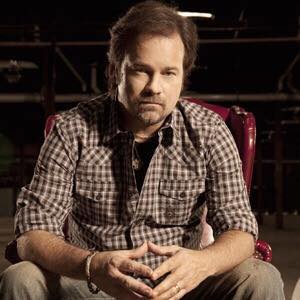